“Politicians who openly fundraise for organizations that provide such horrendously inappropriate material to K-12 students should be held accountable.”

Let’s recap a series of events from several months ago.

In March 2017 I published a blog article exposing how the GSA Network website, organized by the Institute for Sexual Minority Studies and Services (iSMSS) at the University of Alberta, included many community support links for K-12 children that led directly to sexually graphic material.

However, despite the fact that iSMSS severely violated the public trust and endangered the safety of children, the government still entrusts them with a tremendous position of trust, authority and direct access to K-12 students in Alberta schools.

And even more alarming is that politicians continue to flock…

“Why has there been so little opportunity for public consultation when it comes to these massive changes to legislation that will impact every school in this province?”

*This message is being shared with permission from a Parents for Choice in Education email sent out this evening.

Minister of Education David Eggen has officially announced he will use the coercive strong-arm of the government to legally enforce secrecy upon all schools in Alberta, confirming new legislation is coming this fall through amendments to the School Act.

By legislating the removal of loving parents in the lives of children in school, we remove a school’s ability to be responsive to the needs of each individual child in each unique circumstance.

Parents cannot be supportive if they are not included. Therefore, the priority must be on assisting K-12 children to bring their families into the conversation, rather than legislating secrecy and leaving good parents in the dark.

If you care at all about parental rights in Alberta, don’t vote for Brian Jean. 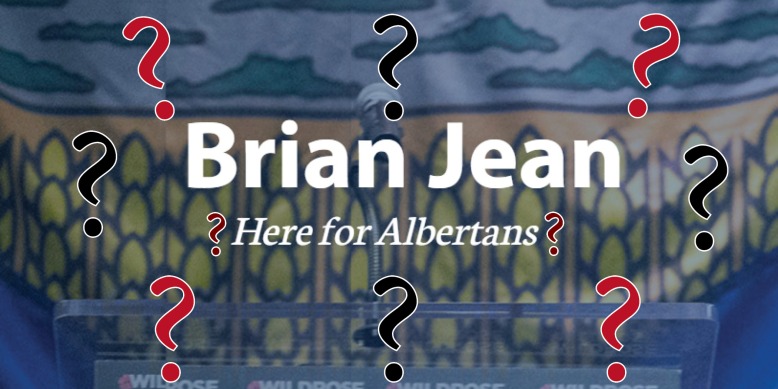 A couple days ago I published a letter on my blog that I wrote to you in January 2017 following a meeting we had together.

In that letter I had offered you an opportunity to clarify several statements you made at our meeting, which I found deeply concerning.

Your staffers promised me a reply. I followed up by email. And by phone.

But nine months have gone by. And a reply never came. Not even a form letter.

Since I published the letter publicly, have you tried to finally offer some response of clarification or a reason for the oversight? 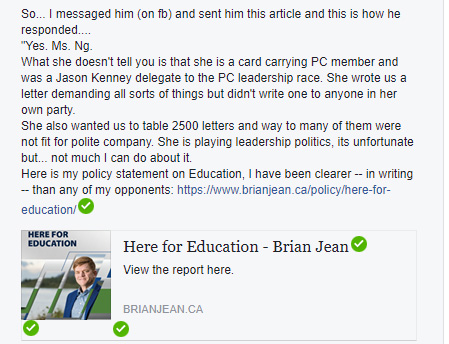 If this was actually written by you or your team then you have proven, yet again, that you are totally unwilling to address the legitimate concerns of Albertans when it comes to the education of…

“Now, more than ever, we need a leader who will consistently prioritize the education of our next generation without faltering or wavering in his commitment to ensure the highest standard of care for our children.”

Rarely have I felt so belittled and disrespected. After volunteering hundreds upon hundreds of hours defending our families and our freedoms against government overreach, Mr. Jean had the audacity to tell me to my face that “you need to do more” – suggesting he still won’t take a stand for our children!

Those were the words I sent to a friend, shortly after an hour-long meeting with Brian Jean, MLA Leela Aheer and three Wildrose staffers on January 27th, 2017.

I never wrote anything publicly about that meeting. There didn’t seem to be a point in sharing about such an unproductive hour.

That is, until now.

On October 28th members of the United Conservative Party (UCP) will vote for a new leader, a person who could potentially become the next premier of this province.

“We need an uprising of parents, grandparents and citizens who will take a stand for what is important – especially when the media chooses not to.”

Answer: Whenever Kristopher Wells and his friends ask the media to do their bidding.

Tyler Duce is a candidate running for the position of school board trustee in south Edmonton.

He is promoting the engagement of parents in their children’s education through a common-sense “Families First” platform.

And unfortunately, that puts a bulls-eye on his back.

Dr. Kristopher Wells digs up an obscure 7-year-old, out-of-context social media post from Tyler Duce and then uses his bully pulpit of Twitter to post his typical accusations.

And suddenly – for some strange reason – a screenshot from 2010 becomes the centerpiece for “news”.

Yet most troubling of all is that the media continues to turn a blind eye to the extremist, unprofessional behavior of the very person…

So, which shall it be? The Blue Pill, or the Red Pill?

“The media run away from Christian martyrs because they are a powerful witness to the Christian faith.” 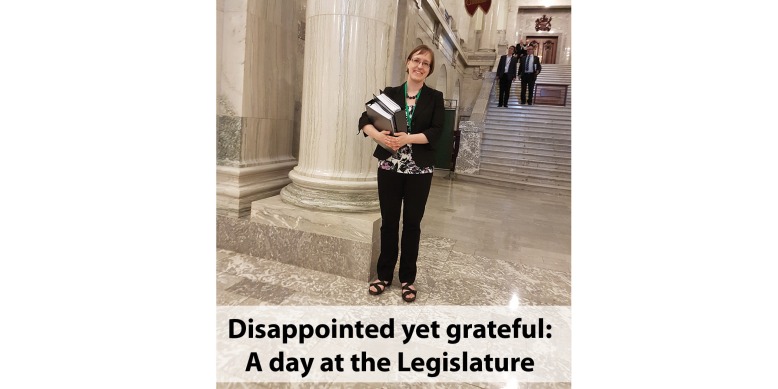 Thank you to MLA Leela Aheer for her kind words of introduction welcoming me as a guest in the Legislature this afternoon. I have included a transcript and video below:

It is also with pleasure that I am going to introduce to you Theresa and Daniel Ng. Theresa is the parent who brought our attention in the inappropriate links the provincial GSA coordinator website. Her vigilance in advocacy resulted in the links being removed from the website. I would like to congratulate Theresa for her efforts on behalf of all Albertans. We owe her a debt of gratitude for her careful attention. Later today I will be tabling the names of 2, 700 of those Albertans who stand for the protection of all children. With Theresa today is her son Daniel. I thank Theresa for bringing Daniel to remind us all in this Assembly that it is the children like…

If you have to reinstall macOS…

Over a month after the release of macOS Sierra 10.12.4, Apple quietly let slip the news that it changed macOS Recovery modes, including the startup key combinations used to enter them. Full details are given here, in a Knowledgebase article dated 3 May 2017.

If your Mac is running a version of macOS/OS X prior to 10.12.4 and supports Recovery mode, the available modes and their reinstall behaviour remains unchanged:

There are now effectively three different Recovery modes, which behave differently depending on whether your Mac is running…

Will the real modern-day “Hitler” be easy to spot?